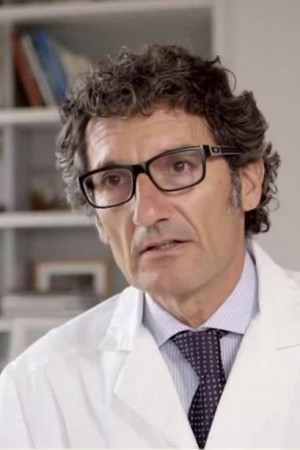 Dr. Jordi Monés is an M.D., Ph.D., Ophthalmologist, Macula and Vitreorretinal Specialist and Researcher. He is the Director of the Institut de la Màcula and the Director, Principal Investigator and one of the founder governors of the Barcelona Macula Foundation: Research for Vision since 2011. Member of COMB 22.838.

Since 2007 he is the Director of the Institut de la Màcula in Barcelona (accredited site of the network of excellence in research, the European Vision Institute) as well as Medical Director and one of the founder Governors of the Barcelona Macula Foundation: Research for Vision, since 2011. Dr. Monés was also Board Member of Futbol Club Barcelona and the Commissioner of the Barça Innovation Hub and of the Sports Science Department (Medical, Performance, and Technology) from 2010 to 2017. In his commitment for improving public health, he envisioned and achieved the FCB stadium smoke-free policy, the only one in Spain even today. This accomplishment resulted in several prizes and public recognition, including from the European Commission.

His research fields of interest are the pathophysiology, imaging and emerging therapies for AMD and retinal degenerative diseases, with particular interest in the end-stage atrophic form, regenerative approaches with stem cells and gene therapy, microbiome, and clinical biophotonics.

Dr Monés was involved in the earlier stages of experimental photodynamic therapy at the MEEI and was afterwards actively engaged in the early Trials for exudative AMD, the TAP and VIP studies. At his return to Barcelona, after Harvard University and Tecnológico de Monterrey, he pioneered the use and development of novel AMD imaging techniques, particularly indocyanine angiography, and related laser therapies, such as feeder vessel treatment. Subsequently he has been principal investigator and extensive presenter of most of the international multicentre clinical trials and investigator-driven trials for the treatment of AMD, actively involved in their design and conduction as part of several steering committees. He has contributed in the optimization and design of proactive regimens of treatment of neovascular AMD, and publishing and actively advocating in the community for a proactive, sustained long-term therapy to fight against the loss of vision caused by the extended under-treatment in real world practice.

Since 2006, his main focus of interest shifted into the atrophic late stage of AMD (Geographic Atrophy, GA) envisioning and co-designing the first phase I trial for this disease with anti-complement therapy (Zymura, Ophthotech). He has special dedication to the identification of subphenotypes, characterization of disease progression and development of biomarkers. He is committed to the understanding of the pathophysiology of the disease, as shown by a recent publication suggesting a novel hypothesis for the vicious cycle dynamics of GA progression linked to the toxicity of the drusen deposits and the activation of the retinal pigment epithelium.

He is a member of various research groups, including the Consensus of Atrophy (CAM) Study Group, whose main focus is increasing the understanding of atrophic AMD. Dr. Monés actively contributes to the specific objectives of the CAM group, which include generating an OCT-based GA classification, developing relevant clinical trial biomarkers and endpoints, deciphering the pathogenesis of the disease with imaging and histopathological correlations of the atrophic process, and assessing the intriguing role of the non-exudative neovascular AMD in the potential prevention of atrophy. He is currently Scientific Advisor of several Pharmaceutical (Roche, Novartis, Ophthotech, Apellis, Kodiek, Genentech, Allegro) and Biotech Companies, such as the CellCure and Reneuron in the stem cell regenerative therapy field, for GA and retinitis pigmentosa respectively. Currently he is member of the TALON Steering Committee, the European Apellis Committee and the EURETINA Educational Committee.

Dr. Monés has recently participated as Principal Investigator in four major collaborative projects funded from the European Union’s Horizon 2020 Program: the EYERISK Consortium (with a special role in a novel phenotype/genotype cluster analysis that revealed non yet reported gene-phenotype associations, and in disease modelling and risk progression in AMD), the LITE Consortium (biophotonics, constructing and validating for clinical use an adaptative optics scanning laser ophthalmoscope in collaboration with the Institut de Ciències Fotòniques -ICFO-), the PRO4VIP Consortium (innovative public ophthalmological procurement) and the ADVANCECAT Consortium (creating a GA-like swine animal model and performing successful human iPSC-RPE transplantion into this model).

He has published widely in peer-reviewed scientific journals and specialty books and has given more than 300 talks at international congresses and meetings. Dr. Monés is a member of 12 scientific societies, being one of the few retinal specialists who belongs to all the four major retina societies: The Macula Society, The Retina Society, The Club Jules Gonin and The American Society of Retina Specialists..