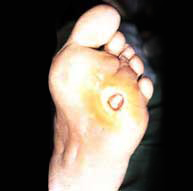 A diabetic foot is a multisystemic, neurological, vascular, ostearticular joint alteration, which, if not early diagnosed and treated, carries with it a high percentage of amputations, with great personal and work repercussions for the patient and an increased sanitary and social cost.

Its scarce prevention at a sanitary level of the very individual and its beginning, in many instances insignificant, results in the necessary expanding performances in time and when the patient is finally treated, irreversible lesions already exist that could have been avoided, or at least minimized.

In 1997, the World Health Organization gave some estimates of Diabetes Mellitus) in 124 million people. Of them, four million has Type I Diabetes and 120 million had Type II diabetes. As a result of these data, estimates for the year 2000 and for the longer term, until 2010, are a substantial increase with the figures raising from 152 to 221 million diabetic people, respectively.

Diabetes comprises part of the four classical risk factors of atherosclerotic conditions, together with smoking, hypertension and hypercholesterolemia.

The metamorphosis since the discovery of insulin in 1922 is amazing. In the pre-insulin area, 65% of the patients succumbed in diabetic coma; after the command of the acute metabolic deviations, the vascular conditions and infections passed to the first level. The latter appearance of antibiotics caused infections to decrease and presently 2/3 of diabetic die from vascular complications.

The risk of a diabetic patient’s suffering a lesser and/or greater amputation has increased. A great number of studies affirm that the cumulative incidence of amputations in the population in which diabetes is diagnosed before 30 years of age, and with a development of more than 10 years, surpasses 5% in Type I DM and 7% in Type II DM.

Eight percent of adult diabetic patients already have arterial disease in their lower extremities at the time their diabetes is diagnosed.

The existence of this vascular complication in the lower extremities implies the presence, to a greater or lesser degrees, of a simultaneous cardiac or cerebral vascular disease.

Between 40 and50% of diabetics develop in their life span a foot ulcer, which in 20% lead to an amputation of the extremity.

The Spanish Society of Angiology and Vascular Surgery defines a diabetic foot as a "clinical alteration of a neuropathic, etiopathogenic basis, induced by hyperglicemia maintained, in which, with or without the co-existence of ischemia and previous traumatic triggering of a lesion, an ulceration of the foot develops. This refers to the initial causes being a previous trauma (callous, a hit, wound, or reddening) to a foot, insensitive by vascular affectation of the nerves, owing to the elevation maintained of glycemia and depending on the existence of vascular disorders of the nerves, will have greater or lesser consequences.

An ulcer on the foot of a diabetic patient in relation to one of a non-diabetic patient has less chances to easily scar: it is more likely that it will become infected and also that this infection is defined and therefore, will result in gangrene which finally results in amputation.

Before this data, there was doubt that the best treatment is the prevention and that this is carried out by the Endocrinologist, Podiatrist and the Angiologist-Vascular Surgeon, by making an early diagnosis and by controlling it and aggressively treating the first signs or warning symptoms.