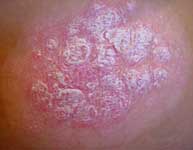 It is never contagious and therefore no precautions are necessary for somebody caring for a person with psoriasis.

When and why does it appear?

It can start at any age but most commonly between 15 and 35 years of age. The development of the disease is very unpredictable; often reoccurring throughout the life of the patient but is always benign.

The outbreaks can last from a few weeks up to several months. Usually the plaques or patches of affected skin will often improve if not totally disappear between episodes and sometimes the person may look completely better. These remissions can happen spontaneously.

What are the current treatments?

The most common way of treating psoriasis is the use of creams containing corticosteroids and derivatives of vitamin D but the results are generally unsatisfactory.

One of our best allies in fighting psoriasis is the sun. However, It is important to remember to keep the skin well hydrated both during and after your time in the sun for it to be effective.

This kind of therapy is used in adult patients with moderate or severe psoriasis when the patient has no contraindications, does not tolerate or does not respond to other drugs used for the treatment of this disease. (Photo chemotherapy, methotrexate, acitretin and/or ciclosporin).

Due to the way it works regular medical checks are essential which can include a blood test, a chest x-ray and a Mantoux skin test.

The biological drugs are self-administered on a weekly or monthly basis using a subcutaneous injection pen depending on the type of medication used.

The treatment (whether it is topical, systemic or biological) should be individually personalized in each case bearing in mind the age, sex, habits, past medical history, the type of psoriasis and the previous treatments given. Taking into account all of these factors the dermatologist, along with the patient, will choose the most appropriate form of treatment.

The most common adverse effects are headaches and the local inflammatory effects of the injections.
Etanercept is contraindicated in patients with a history of serious infections, advanced heart failure, demyelinating disease or cancer.