Dermatology
"When the sun shines" - Presentation 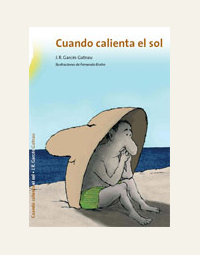 portada_libroSun and Skin: an inevitable relationship

This book would probably not exist if having a suntan was not fashionable, if tanned skin was not perceived as a sign of health and attractiveness. There is no other explanation for why we humans with white skin insist on lying in the sun when it is at its hottest during the summer, causing premature aging of our skin and increasing our chances of developing skin cancer to such an extent that it has currently become the most common form of malignant tumors. To get that desired tan we are prepared to suffer with pride the intense and painful redness we hope will turn into a shade of skin arousing admiration, envy and social approval.

If this aesthetic trend did not exist, UVA tanning beds would only be used in dermatological treatments such as those for skin disorders like psoriasis, among others. Suncreams would only be used to protect the uncovered skin of those people who for different reasons must be exposed to sunlight rather than an excuse for those who wish to sunbathe without getting sunburnt, which is mistakenly known as a "safe suntan". Cases of skin cancer would also fall significantly, as well as skin deterioration, spots, blemishes, wrinkles and the entire business organized around them. The direct relation between these skin disorders and excessive exposure to solar radiation is indeed very well known.

Year after year, the different health campaigns to raise awareness provide ample evidence of this relation. Why then do they fail? Comparison with similar campaigns warning about the dangers of smoking objectively reveal a notable success rate in terms of response, so is nicotine less addictive tan sunbathing? Is it easier to give up smoking than to give up sunbathing? Obviously not, but not smoking is socially more acceptable than looking "under the weather" or "looking pale". In other words, a "healthy appearance" is as well regarded socially as "stopping smoking". But is solar radiation really comparable with tobacco smoke? No, because tobacco smoke is always harmful, while solar radiation is necessary for life itself. In this case, the insidious advertising slogan used by Tabacalera Española (Spanish State Tobacco Monopoly) some years ago – "Smoke less, tastes better" – would be better applied to sunbathing habits. The importance lies mainly in what "less" really means and when we can actually regard it as "too much".

A closer analogy to the sun would be wine. When I have to explain to my patients how much, how and when they should expose themselves to the sun, I often make a comparison with wine. Drinking a little wine with meals is good for you and recommendable. Drinking too much wine too quickly makes you drunk; drinking more than is recommendable over a long period of time may not make you drunk, but it destroys the liver and leads to other more serious collateral effects. We could say that someone who gets drunk often over a certain period of time moves more quickly towards the phase of irreversible changes. Drunkenness in solar terms would be sunburn, intense or acute reddening of the skin, which we have all suffered at one time or another, and eventually the long-term effects such as skin blemishes, wrinkles and skin cancer.

The aim of this book is to provide enough intelligible information for each reader to learn how to take the sun according to his or her own individual circumstances (type of skin, personal or family background, etc), and to acquire sunbathing common sense to enable you to live a full life. Thus, we look at the spectrum of solar radiation, its benefits, vitamin D absorption, its relation with the mineralization of bones, the ozone layer, good ozone, bad ozone, etc.. We explain what ultraviolet light is, what UVA and UVB rays are, and also about the different types of sunscreens and lotions and what protection they provide, as well as when, why and how they are to be applied.

This is the story of a contact, an inevitable relationship: the sun's rays with the skin. Like all relationships, it consists of two elements, a meeting and its consequences. In the following chapters we are going to get to know in more detail the two parties involved: solar radiation and our own dear skin. Later we will consider their interaction and what we can expect from this relationship – the good things, the not so good things and the bad things. Finally, we will take a look at the measures to be adopted for the relationship to prosper, so we can draw from it the greatest benefits with the least harm, never forgetting to apply common sense.

This book contains seventeen color plates by the renowned Chilean artist Fernando Krahn, who has a long and distinguished international career in publications, daily newspapers and magazines, as well as being the author of more than forty books published in the USA, Spain, Venezuela and Chile.