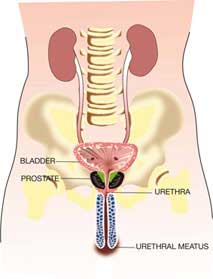 prostataThe human urinary tract is composed of two main organs: the kidneys, which are the organs in charge of producing urine, and the bladder, where urine is stored to later be released through the urethra.The ureters transport urine from the kidneysto the bladder.