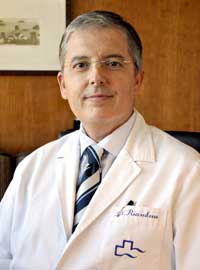 Since 1990, he has specialized in Angiology and Vascular and Endovascular Surgery and has treated disorders of the circulatory system, among them:

He began his doctoral thesis at McMaster University, Hamilton, Ontario which he completed at the Saint Pau Hospital of Barcelona.

Currently, he is Professor of Surgery at the University of Barcelona and is a member of the most prestigious scientific societies related to vascular surgery all over the world. He is a visiting Professor of Stanford University (USA), the University of Pittsburgh (USA) and Belgrade (Serbia). He is a Former President of the European Society of Vascular Surgery (ESVS). President of the American Society of Angiology (Spanish Section) and Vice President of the Society for Vascular Surgery (ISVS) (International Society for Vascular Surgery. He is a member of 15 editorial committees of international scientific journals and heads the publication in Spanish of "Tecnicas Endovasculares" (Endovascular Techniques).

Author of some 350 articles in international in international and national journals, he has published more than 60 book chapters. He is a regular guest lecturer and member of the scientific committees of the principal international congresses that take place throughout the world on the vascular and endovascular specialty and directs the International Symposium of Endovascular Therapeutics (SITE) which takes place in Barcelona every two years. Founder and President of the Endovascular Foundation, main focus of attention is on his patients, to whom he is unswervingly dedicated.