Endoscopic surgery, at a glance

Minimally invasive surgery and the limitations of traditional surgery

In traditional cervical spine surgery (surgery of the neck), large skin incisions are necessary to expose the neck tissues and open up enough space for surgical instruments to fit. In order to reach the spinal chord and nerves that are being compromised, important structural components of the cervical spine such as the ligaments, the intervertebral disc or bone are removed during open surgery. This can lead to instability of the cervical spine if it is not additionally stabilized with plates and screws. Therefore, in open surgery, usually the cervical spine is fused with an interbody implant and the function and mobility of the neck can be impaired. The removal of soft tissue and bone may lead to further complications such as bleeding, wound healing problems and instability in the postoperative stage and may require additional surgeries. When multiple cervical levels are operated on with traditional open surgery, usually the patient is required to stay at the Intensive Care Unit (ICU) for several days to recover from the opern surgery.


This video showcases an endoscopic surgery with a posterior approach to the cervical spine for a case of a female patient suffering from radiating pain into her right arm due to an herniation at C6/C7. 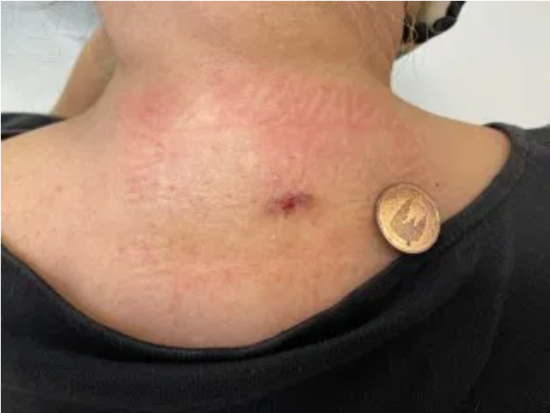 Almost imperceptible surgical wound at a patient’s neck only 1 week after posterior endoscopic cervical spine surgery (a 5 Euro-cent coin is shown as a reference to better estimate the wound’s size).

Advantages of Endoscopic Surgery of the Cervical Spine

Endoscopic surgery is a minimally invasive surgery as it does not requires to remove or "open" tissues in the neck. The patient’s post-operative recovery is much faster. Moreover, endoscopic surgery can be performed under local anesthesia. The patient usually resumes normal life with walking and moving all of his limbs a few hours and is discharged from hospital in less than 24 hours after surgery. Endoscopic surgery of the cervical spine does NOT require placing interbody implants NOR does it fuse the operated level, preserving the mobility and flexibility of the cervical spine. A stay in the Intensive Care Unit (ICU) after endoscopic cervical surgery is NOT necessary at any time, even if the surgery was on several cervical levels at the same surgery.

Post-operative pain is usually immediately significantly decreased. Hence, small dosage or even no pain medication is necessary during the first week after surgery.

Endoscopic surgery consists of advanced technologies, like HD video, laser and radiofrequency ablation, etc. among other sophisticated technology to provide a safe, fast and effective, pain-relieving surgery to the patient.

Neck pain (cervicalgia), pain in the back-head (occipito-cervicalgia) and radiating pain to the shoulders, arms and fingers of the hands (brachialgia) can be effectively treated with endoscopic cervical spine surgery. Endoscopic surgery is also indicated for patients with chronic neck and back-head pain but no radiated arm pain nor neurogenic deficit (muscle weakness, tingling, etc.) for which traditional surgery is not an option and have been treated conservatively with little success.

Endoscopic spine surgery allows to effectively resolve neck pain problems caused by, e.g. a herniated cervical disc, with or without an impinged nerve, foraminal stenosis, myelopathy caused by a central canal stenosis and a disk protrusion causing intense neck pain, resotring a high quality of life to the patient.

This video shows an endoscopic anterior cervical discectomy (ACD) in a case of a 42-years old patient suffering of a disk herniation compressing the spinal cord. The herniation was removed by endoscopic ACD with only a small skin incision of just 9 mm length. The patient was already walking freely a few hours after surgery and was discharged from the hospital a few hours later.


Images of a cervical endoscopic surgery 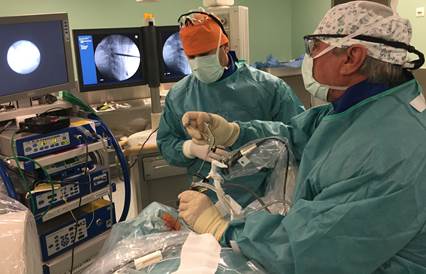 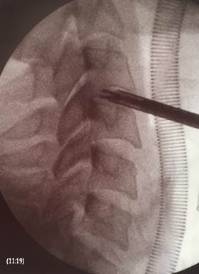 Postoperative skin picture of the surgical wound of only 3 mm length on a patient’s neck.