In cases of narrow canals (central spinal canal stenosis), bone and/or soft tissues such as the yellow ligament may compress the spinal cord to a point where nerves are unable to transmit signals to the lower extremities.

Typical symptoms of this pathology usually appear after walking short distances (50 – 150 meters) in the form of intense pain in one or both legs. This pain is known as intermittent claudication , also known as "vascular claudication". To relieve pain in the legs, patients usually sit or lean forward by flexing their back. 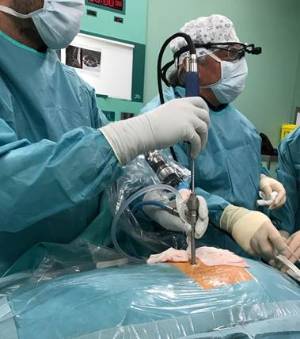 Endoscopic decompression by interlaminar route allows an immediate recovery and discharge the day after the intervention. This surgery is indicated in cases of neurogenic claudication due to central stenosis of the lumbar canal and sciatic pain due to unilateral compression of the intervertebral recess.

The pain usually subsides in less than 24 hours after endoscopic decompression.

This 76-years old female had been suffering from chronic pain radiating into her right leg for the past 2 years and had been getting worse in the last 2 months, up to a point were the pain was unbearable. The patient was suffering from central canal stenosis at level L4/l5.

"Spinal decompression is a classical surgical technique used in cases of central spinal stenosis. The spinal canal (bone and soft tissue like i.e. ligaments) is decompressed to release the spinal cord and nerves that are being compressed by hypertrophic (over-grown) bone structures or soft tissues, such as the yellow ligament, cysts, etc. However, classic open decompression or microscopic decompression techniques usually are quite invasive as they require an extensive removal of bone and soft tissues, which can result in an instability of the operated level. Plenty of bleeding of the removed structures can difficult the surgeon visualizing the surgical field which can result in injuries of nerves." 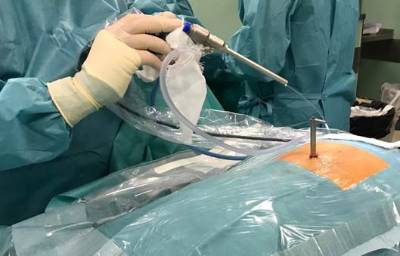 Image of an endoscopic cannula placed on a patient’s back.
The endoscope is in Dr. Morgenstern’s hand (left). Note the minimal incision in
the skin of less than 1 cm in length and the absence of bleeding from the wound.
Thanks to advances in surgical technology, decompression can now be performed endoscopically for central canal stenosis through the interlaminar (bone) window of the affected level. This novel technique allows the removal of bone structures and soft tissues that compress the nerves through a skin incision of only 1 cm long length. 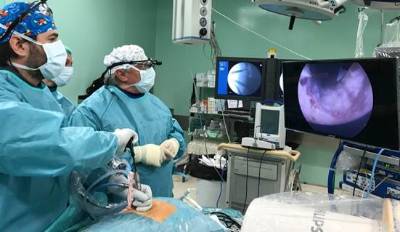 Dr. Morgenstern realizando la descompresión endoscópica interlaminar guíandose por las imágenes visualizadas en un monitor de alta definición
Image of Dr. Morgenstern performing an endoscopic interlaminar decompression
using live video visualizaton as displayed on a high definition monitor.
The endoscopic decompression system has an incorporated camera in the endoscope that allows an excellent visualization of the nervous structures of the lumbar spine. The surgeon can perfectly distinguish all tissues in the spinal canal, decreasing the invasiveness of the technique and the likelihood of an injury.
Clinical Case: Interlaminar endoscopic decompression 96 year old patient
Endoscopic surgery is so minimally invasive that it opens the door for spine surgery on patients that usually would not be eligible for traditional open and microscopic spine surgery, like weak patients with many previous illnesses and very old patients, as in this case presentation of a 96-years old patient.
Surgical Video
Images of the endoscopic decompression surgery 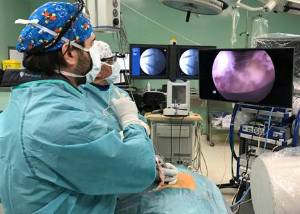 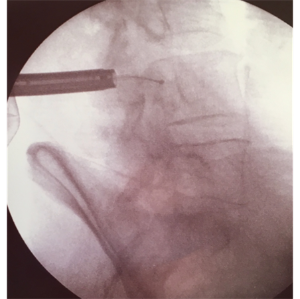 Intra-operative X-ray image showing the endoscopic cannula (left) out of which a radiofrequency electrode runs out (small ball at the tip) across the spinal canal. This proves that the spinal canal has been decompressed and the the release of the dura. 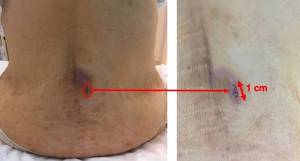 Postoperative images of a skin wound with a length of just 1 cm (red arrow). A small hematoma (blue in color) can be seen around the wound, which usually disappears within a few days after surgery.