The decision wether a scoliosis is treated conservatively (non-surgical) or with surgery is usually taken depending on the extent of the spine’s deformity (measured with Cobb’s angle), the location of the scoliotic curve on the spine, the patient’s age and symptoms and the rate of progression of the scoliosis in time.

Conservative treatment is usually recommended for patients below 10 years of age, ages between 10-14 years and a scoliosis with a Cobb angle between 20º to 40º degrees. Conservative treatment usually comprehends a brace (corset) that has to be adjusted by an orthopedist to the patient’s trunk. Patients with a persistent severe scoliosis after having finished their adolescence (body growth) and those with a progressing scoliosis despite wearing a brace usually require surgical treatment.


Fusion of the spine

Traditional scoliosis surgery relies on spinal fusion (bone growing throughout the whole spine). Once spinal fusion has been accomplished, the result is an irreversibly stiff spine without flexibility and movement.
For the last 30 years and presently, the traditional scoliosis surgery consisted of a posterior approach, i.e. operating the patient from his back, with screws and rods to fixate the spine. Back then, this approach represented a big step forward in the surgical treatment of scoliosis but it has been shown to have several disadvantages. The goal of this type of scoliosis surgery is the fusion of the spine, which results in a stiff spine with no mobility. Once fusion has been accomplished, it is irreversible. 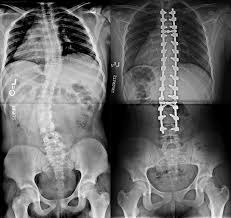 X-ray image of a scoliosis before surgery (left image) and after surgery using the traditional posterior approach with screws and metallic rods (right image).


The result of traditional scoliosis surgery is an irreversibly stiff spine that has lost its flexibility and ability to move, while the growth of the spine (and therefore also the trunk) of the patient is also irreversibly impaired. 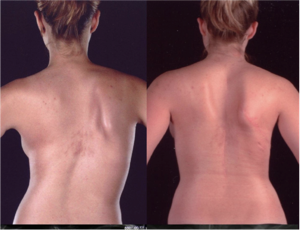 
The posterior approach is quite invasive, as it implies separating all the back muscles from the spine, resulting in considerable blood loss, some days of post-operative care at the Intensive Care Unit (UCI) and hospital discharge no before 7-10 days after surgery.

At the Morgenstern Institute of Scoliosis we offer a novel alternative to the traditional spinal fusion surgery with stiff metallic rods. Recently, a new "anterior scoliosis correction" (ASC), also known as "vertebral body tethering" (VBT), surgical technique has been introduced to treat scoliosis.


Hence, this novel surgical technique (ASC / VBT) preserves the mobility and flexibility of a children’s spine. Moreover, ASC / VBT modulates the spine’s growth such that it grows in a harmonious and natural way. At the end of the growing process, the children end up with a normally sized body.


Another great advantage of ASC / VBT surgery is that it is NOT irreversible, as it does not induce spinal fusion. Hence, with ASC / VBT surgery we are not burning any bridges. In the unusual case of an unfavourable progress, it would be possible to go back and use the traditional surgery technique, if it were required, with no downside for the patient. 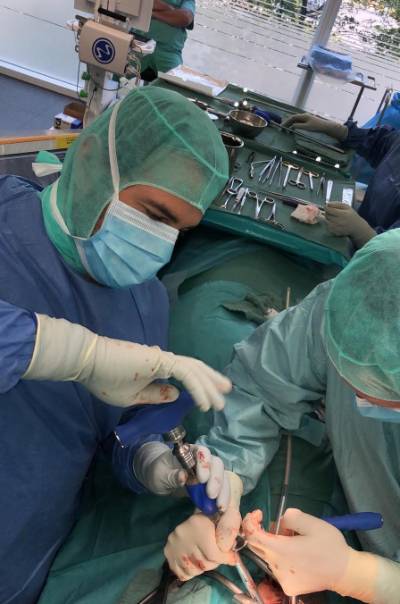 ASC / VBT surgery is performed using a minimally invasive approach accessing the spine through the patient’s ribs (anterior approach, also known as mini-thoracotomy) assisted by thoracoscopy. A thoracoscope allows a detailed visualization of the anatomy with a high-definition camera and video-system, just like an endoscope. Due to the high quality and precision of the images obtained with the thoracoscope, the risk of a surgery-related injury is minimized. 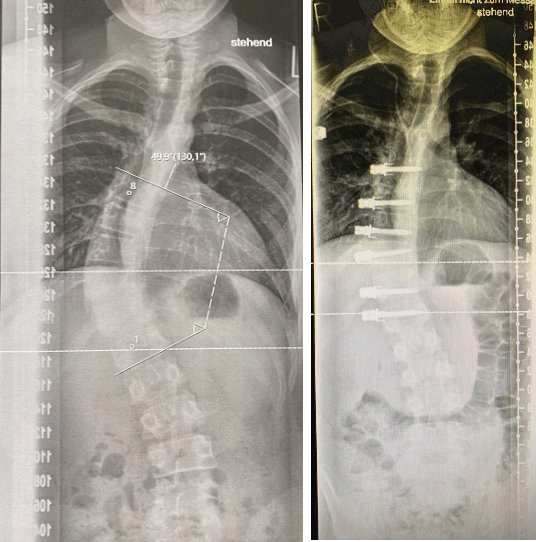 X-ray images of patient with a lumbo-thoracic scoliosis with a 50º angle before surgery (image on the left) compared to the X-ray image after ASC surgery showing a corrected spine with an angle of 20º (image on the right). The patient’s growth will end up reducing the small remaining curve and straighten out the spine.


ASC / VBT is a minimally invasive surgery with a fast post-operative recovery and an early hospital discharge that usually takes place only 4 days after surgery (if there are no complications) and does usually NOT require intensive care at the ICU. The skin incissions are small and the patient usually shows an early recovery with a decreased need for pain-killers and narcotics in the post-operative period (the days immediately after surgery).

At the Morgenstern Institute of Scoliosis in Barcelona, Spain we are a team of german surgeons who have been trained in Germany and the USA to perform ASC surgery. In fact, the anterior approach is a very common approach in the german schools of surgery, making it very familiar to our surgical expertise.